On a recent Philadelphia weekend that featured a Beyoncé concert, a professional bike race, and Wizard World Comic Con, Jessica Pontenot spent a good part of her Saturday seated in the second row of a Center city hotel conference room learning about Pennsylvania’s medical marijuana program.

“I came here for multiple reasons,” said the 31-year old Southwest Philadelphia tattoo artist, who works part time for UPS. “I want to find out how to get a [medical marijuana] card for my mom,” who has several of the conditions on the state’s list of 17 approved serious medical conditions for medical marijuana. “I always told my mom [marijuana] could help her, but she never believed me. Now she does.” 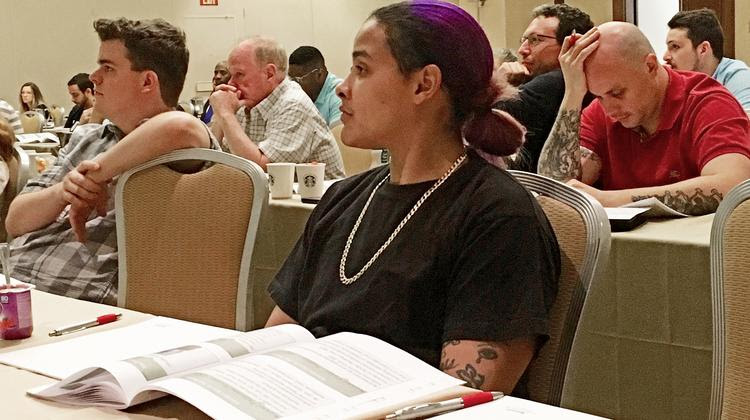 Pontenot is also interested in getting involved in the dispensary part of the business.

Pennsylvania’s new medical marijuana program is expected to generate thousands of new jobs and millions of dollars in taxable revenues.

Some of the new jobs will be for budding entrepreneurs interested in becoming growers/processors and dispensary operators. Those business operators will need to fill a long list of jobs that includes budtenders, trimmers, lab technicians, operation managers, retail managers, bookkeepers and security guards.

While the upfront costs to entrepreneurs wanting to enter the market are expected to run into the millions of dollars, the payoff could be substantial. The ArcView Group, a market research firm that studies the cannabis industry, estimates the Pennsylvania medical marijuana market will start out with annual sales at about $125 million and grow at a rate of about 180 percent per year in the program’s first few years.

“There will also be huge opportunities for entrepreneurs who want to create ancillary businesses that are integral to the core growing and dispensing businesses,” said Seth Goldberg, a Philadelphia attorney with Duane Morris who specializes in commercial and health care matters.

Last month’s day-long seminar, hosted by U.S. Cannabis Pharmaceutical Research and Development, attracted Pontenot and more than 125 other people of all wages willing to pay the $350 entry fee to learn about the medical marijuana business. Seated two chairs away from Pontenot was a 37-year-old telecommunications salesman from South Jersey, who identified himself only as Terence. Terence said he wants to be a grower and breeder. “I had a friend show me the way and I fell in love with [growing marijuana],” he said. “I’m here to network and talk to people.”

Michael Patterson, CEO of Florida-based U.S. Cannabis, said he believes the medical marijuana business will be a billion-dollar business in three to five years.

“We call them the three pillars of a successful program,” Patterson said. “We think Pennsylvania’s law will be a model for other states.”

Patterson said his advice for people wanting to get into the medical marijuana business is to put together strong teams of people with diverse backgrounds and skill sets. He also suggested applicants should spend a lot of time thinking about a provision in the law that will require people to state in their application how their operation will better society.

Robert Calkin, president of the Cannibas Career Institute in Los Angeles, provides classroom training to people wanting to get involved in medical marijuana programs. He too put the formation of a strong team at the top of his “to-do” list for people applying to be growers/processors or dispensary operators.

“Nobody can do everything themselves,” Calkin said. “Different people have different areas of expertise. You have multiple resources in this industry — you have to have backups to your backups.”

Calkin said meeting all of a state’s regulations can be a daunting process.

“It can take up to 500 hours to develop a business plan,” he said. “Maryland had 170 questions on their application. People will have to answer a lot of questions they might not anticipate, such as questions about security and preventing diversion.”

Kevin Kravcak owns a Bucks County real estate brokerage firm. He has put together a team of business partners that is exploring getting involved in the medical marijuana industry.

“What attracted me is the business opportunity,” Kravcak, 41, said. He recently attended a Cannabis Career Institute seminar in Philadelphia. “This [new law] has been a long time coming.”

Kravack said his team is leaning toward establishing a dispensary operation.

“Right now everything is so preliminary with the Health Department still developing regulations,” he said. “Pennsylvania’s program is still in its infancy, so it’s hard to zero in on what all the opportunities will be. We are doing a lot of networking and lot of research online.”

Patterson noted Pennsylvania’s law does not contain any stipulation that a certain percentage of permits go to companies owned by minorities, women or disabled veterans. It does, Patterson said, include a clause that gives applicants additional points for including such groups in the subcontractors with whom they plan to do business.

Another challenge for entrepreneurs, he said, will be deciding where to set up their businesses. He said some municipalities will welcome growers and dispensers because of the business tax revenues they will generate, while others will have a “not in my back yard” attitude that will be tough to overcome.

“There’s a lot of strategy to this,” he said.

Goldberg said those wishing to get involved in the medical marijuana process will also have to be willing to assume some risk.

“It’s a capital-intensive process with some unknowns,” Goldberg said. “You have to get into the process now before the regulations have been provided, and without knowing if you are going to get a license.”

Brett Roper, founder and COO of Denver-based Medicine Man Technologies, a consulting and advisory services company in the cannabis industry, agreed the medical marijuana business is not the place for those looking to get rich quick.

“People looking to get into the space need to recognize this is not just a ‘cash out your 401(k)’ or ‘max out your credit card’ type of opportunity,” Roper said. “We are estimating in Pennsylvania you’ll need $6 million to $10 million is you want to go for a producer license.… This is not for the faint-hearted.”

The dollar range is based on whether the entrepreneur intends to lease or own the land for his or her business.

Roper’s other advice includes having a compelling story that separates a person from competing applicants, putting together a team that includes consultants who have worked in the medical marijuana industry in other states, hiring a professional writer to prepare an application and making connections with local people who can “champion” a proposal through the regulatory review process.

Gretchen McCarthy, director of dispensary operations at Compassionate Sciences ATC in Bellmawr, N.J., said her advice to people wanting to establish a dispensary in Pennsylvania is to “be sure you are well-funded to endure the unknowns that come with operating in a new industry that is not fully understood by the regulatory bodies, doctors, and patients.” McCarthy also said to “make sure the advice you are receiving from industry experts is tried and true.”

Compassionate Sciences is not planning to expand into Pennsylvania, she said, because the organization was formed as a nonprofit limited to operations in New Jersey.

The wait for implementation

The Pennsylvania Department of Health expects the medical marijuana program will take between 18 and 24 months to implement from the date the law authorizing it took effect on May 17.

Robert Rudnitsky, executive director of the marijuana advocacy organization Philly Norml, said the Health Department has many questions as it develops the rules and regulations for the medical marijuana program. Among the issues causing questions and concerns are:

R Who and what will govern the decision-making process for determining a qualified applicant?

R What exactly are growers and processors?

R What are the startup and final costs that will be incurred by companies selected to participate in the program?

Health Department Secretary Karen Murphy said last month that the state has started working on temporary regulations for the program and will be seeking input from the public, stakeholders, and partners. “We are also committed to being transparent and communicating effectively throughout the process,” Murphy said. The first temporary regulation will be for growers/processors so that those entities can come online and begin to make products available.

The department intends to issue the remainder of the temporary regulations, sequentially, for dispensaries, physicians, patients and caregivers, and laboratories and anticipates this being completed by the end of the year. The temporary regulations will explain the medical marijuana program’s operation, including how applications will be submitted.

The Health Department plans to issue permits, initially, for up to 25 growers/processors and up to 50 dispensaries. Each dispensary can operate no more than three locations. No more than five grower/processors can be issued a dispensary permit. The regulations require:

R Both grower/processors and dispensary operators will be required to complete a two-hour training course. Both are also required to undergo federal and state background checks and submit a permit application that includes a description of the business and their ability to “maintain effective security and control to prevent diversion, abuse or other illegal conduct.”

R Physicians who want to participate in the program must apply to be registered, demonstrate their training and expertise in treating serious medical conditions, and successfully complete a required four-hour course — which will include the risks and benefits of using medical marijuana — established by the department.

“Businesses need to put their ducks in a row now so they can hit the ground running,” said Goldberg, the Duane Morris lawyer. “If you are a processor you’ll need to acquire technology and space for processing. If you are a dispenser you’ll have to mine for retail locations.”

Goldberg suggested people go online to look at what other states required on the assumption Pennsylvania will model its applications on those in states where medical marijuana is already available.

Both Patterson and Calkin said because of the complexity of developing regulations and likelihood of legal challenges, particularly by people who fail to secure licenses, people should expect the actual start of the program to take longer than the 18 to 24 months projected by the state.

“People think two years is a long time to wait,” Patterson said. “For a new industry, it’s not a long time.”

1. What exactly is medical marijuana?

2. Who will be able to use medical marijuana

Patients with serious medical conditions will be able to access medical marijuana with a physician’s certification at designated state dispensaries. The law mandates that marijuana may only be dispensed to a patient or caregiver as a pill, oil, topical formulation (such as a gel, cream or ointment), liquid or a form medically appropriate for administration by vaporization or nebulization. Dry leaf or plant forms of marijuana are excluded, the law states, until they become acceptable under regulations recommended by the state’s Medical Marijuana Advisory Board.

3. What are the serious medical conditions?

4. Who will oversee the program?

The new law creates a 15-member Medical Marijuana Advisory Board within the Pennsylvania Department of Health. Members will include the Secretary of Health; the Physician General; State Police Commissioner; chairman of the State Board of Pharmacy; commissioner of Professional & Occupational Affairs; president of the Pennsylvania Chiefs of Police Association; president of the Pennsylvania District Attorneys Association; members to be appointed by the governor and six appointees from the legislative caucuses who are knowledgeable and experienced in issues relating to care and treatment of individuals with a serious medical condition, geriatric or pediatric or clinical research. One member appointed by the governor shall be a patient, a family or household member of a patient or a patient advocate.

5. What else will the medical marijuana program do for Pennsylvania?

The state’s medical marijuana program also includes funding for research institutions to study the use of medical marijuana to treat other serious conditions. In addition, the law establishes an advisory committee that will review the research findings and make recommendations to the legislature for changes to the program.